Part of my process of defining and refining my project has been to look for moments when my various interests can be combined in one project. In the past that has meant doing something with a social conscience that involves machinery or photography, or writing a bit of code for an arts organization to help them reduce duplicated effort. If it involves two or more of my interests, and I get to learn something along the way, I’m in!

For my thesis, I had a number of ideas swirling. I was very fortunate to be able to participate in Martha Ladly’s Florence Contemporary course in Italy last spring. I spent a lot of time reading biographies, especially Leonardo da Vinci, Giotto and other key artists who instigated major innovations in painting. I was working on a couple of photography and design projects that presented images and artifacts that were ambiguous as to whether they were from the past or the future, as a way of exploring the possibility of history being cyclical or spiral-shaped, with dark ages  followed by Renaissances. What would the next renaissance be, and who would be there to participate in it?

I tried to map out the relationships between the various ideas I was pursuing like this: 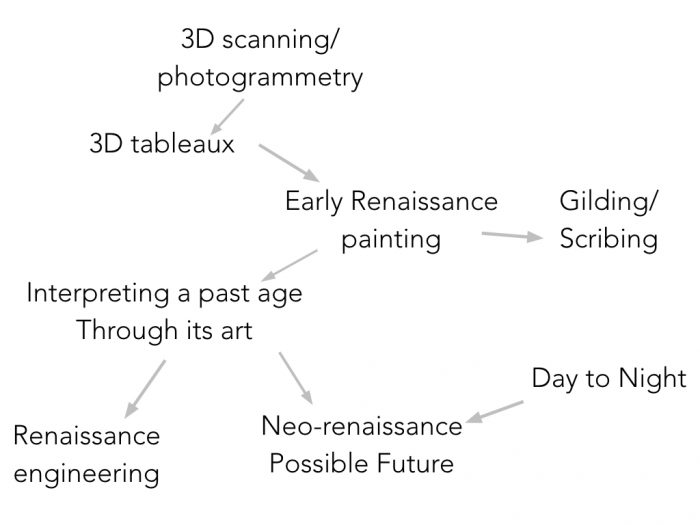 Over the next week or so, I thought more about this and the Future Renaissance seemed to be a perfect way to bring together several different ideas and interests I wanted to pursue. I wrote it in point form notes that began like this:

Through discussions with Kristy, I settled into the idea of distant future machines who roam the earth making images by combining tech and traditional image making techniques, using reclaimed gold for gilding.

In September, I had to explain this to other people, and seemed to make a lot less sense in words than it made in my mind. But maybe this is a case of E.M. Forster’s “How will I know what I think unt il I see what I say?” That is – the ideas are not actually clearly formed in the mind until we need to put them into words. The words may take some polishing, but eventually if the words don’t make sense, maybe the idea isn’t clearly formed.

I wanted to group or organize the key ideas and topics to see what structure might be revealed. After trying various physical groupings with a process akin to moving paper dolls around the page, I arrived at a kind of scatter plot with three poles. The diagram below (fig 1) is composed of captions summarizing the topics of my project. The topics listed have specific meanings – e.g. generative art refers to generative art as it relates to my project, not generative art in general.

The three labels overlapping the edge of the diagram indicate the three major categories of these topics: “Speculative Fiction”, “Practice-based Research”, and “AI, Machine Learning, Robotics”. Each of the topics are plotted inside the circle in relation to all three categories denoted by their proximity. For example, “Generative art” appears close to Practice-based Research, and AI, Machine Learning, Robotics, but not close to Speculative Fiction. Another, “Fusing tech with traditional techniques like gilding” is equidistant from all three categories, which helps explain why it has remained an important part of this project since its conception, even though most other topics have changed quite a bit. 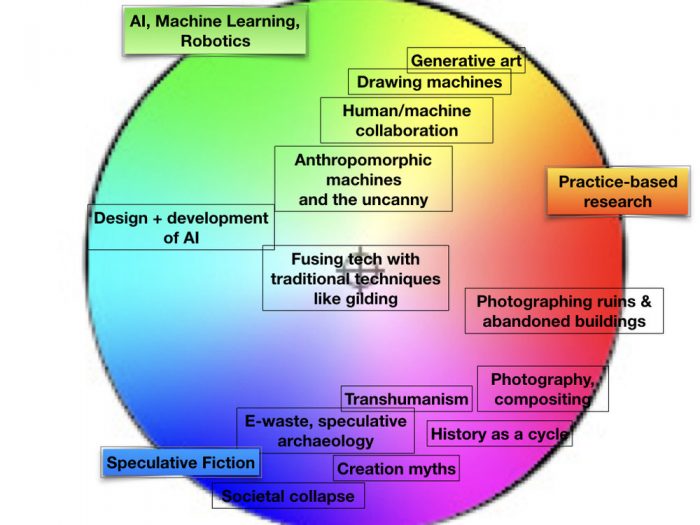 Figure 2. Mapping topics in this thesis by proximity to Speculative Fiction, AI/Machine Learning/Robotics, and Practice-based Research.

The diagram is a bit of a mess, however. Colours were not helpful, and probably only add to the confusion. Bad enough to have a polar plot with a triangular structure and tags scattered everywhere without confusing matters with random colours.

I tried again the following week. As with the previous figure, there were several phases of making this and the structure and logic of the diagram changed. I felt I was getting closer to the heart of the matter when I arrived at the three labels for the yellow, orange and red regions. It felt as though the whole thing was about to click and make sense. I would take a break, come back to it, realize it didn’t work, and change it all around. Here’s the result. 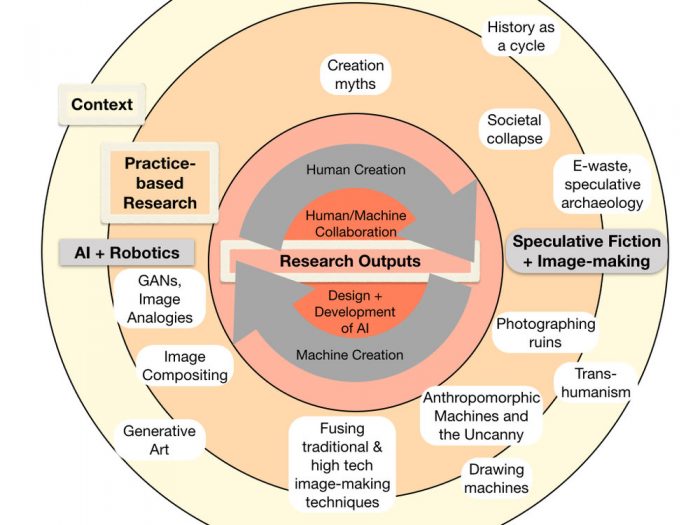 Figure 3. Research Outputs are shown at the centre, as the result of the human/machine collaboration. Farther out (orange ring) are the topics, methods and practice-based research activities that are actively involved in this project. The yellow outermost ring identifies topics that provide important context and support for the work.

I originally decided to make this third diagram in order to give the reader a key to the relationship between the various topics in my thesis. After writing the caption for the image, I realized that it wasn’t that the diagram was failing to get the ideas across clearly, rather it was that the ideas were jumbled, and trying to go too many directions at once. This kind of rich compost heap of thoughts may be a fun conversation, but may not hold together as a single piece of writing. In the diagram I have topics mixing freely with actions. At the centre is an activity, and its result, but it is surrounded by items which are also activities.